Well Monday was a bit of a wash out here in Devon. Although not cold it rained all day which was a bit of a drag.  I went out for coffee with S in the morning. We went to Sainsburys on the edge of Torquay and had a good look around the store before we went in the Cafe. My Dad had given me some money last weekend so I treated myself to a black and white print summer dress, a mini grater and a Bundt tin! I have never owned such a tin but during lockdown have seen various recipes for a Bundt cake on different television programmes so decided it was time I had one.

Tuesday I worked which goes quickly even though it's a long day.  We go to a "Music with Mummy" group in the morning, stopping off at our village park on the way home for snack. Then lunch takes a while with four little ones to feed and clean. Four of the six children have a sleep so we have our lunch, write up our records and entertain the other two. We then have the school run to do and collect a couple of after  school children to be looked after, then it's the park by the school for an hour, home and two little ones to be given tea. It's tiring but I enjoy every minute of it.

Today was nice and sunny so I called for a friend I used to work with and we walked to the park and got  coffees and brownies from the mobile coffee van and had a lovely couple of hours catching up in the sunshine. I made sure dinner was ready and on the table for 5.30 so that afterwards we could go over to Teignmouth for an hour for K and L to have a swim in the sea. The tide was in but we found a sliver of sand to sit on and watch them. They lasted about 45 minutes before they wanted to get out and dry off. It was lovely sat there watching  people swimming, people out in kayaks and people in sailing boats. It's lovely living in a holiday resort as it feels like you are on holiday too. Now we are home and clearing up from dinner while the girls have nice hot showers. 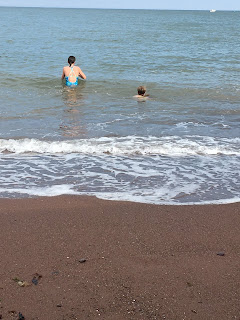 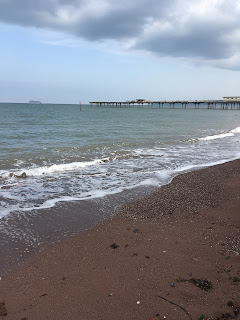 Work again tomorrow in the morning - rushing towards the weekend again.