We are home from our week in Cornwall. We had an absolutely fabulous time with lots of sunshine and time spent on different beaches.

We stayed in a 3 bed mobile home on the Globe Vale Holiday Park which was in the countryside between the coastal towns of Porthtowan and Portreath. We love this area of North Cornwall and have been visiting this area for a good few years now. We actually lived in this area of Cornwall, over near Perranporth, for three years and eldest Daughter S was born there.   We hadn't stayed at this site before but it was a real find. There was a bar and restaurant and a good playground but it wasn't big and rowdy like some sites can be.  The mobile home wasn't very old and had a nice grassy area for sitting out on and a picnic bench for outdoor dining. It had full length windows in the living room looking out over fields. 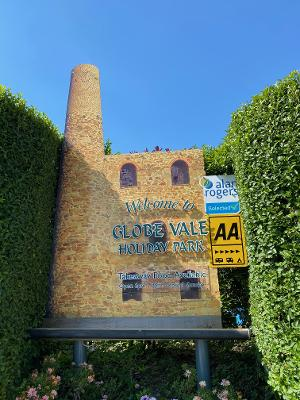 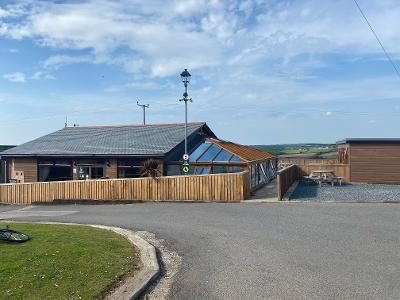 Once we had unpacked we went to Portreath and had an ice cream and a walk along the beach and then came back to camp and enjoyed a barbecue. 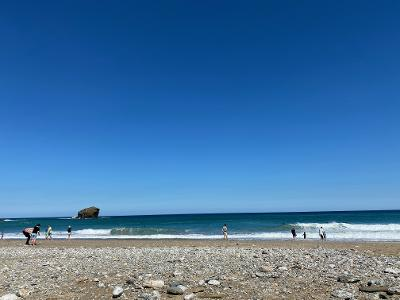 On Sunday we packed up all our beach stuff and a picnic and went back to Portreath for the day as the sun was shining. It was glorious and S and K spent most of the day in the sea with their bodyboards whilst D prefers to lie out in her bikini sunbathing!. L went in the sea and managed to stub her toe almost taking the toe nail off so she spent most of the week hobbling about!

Once we were back at camp and the girls had showered we walked from the site to look at Wheal Peevor tin mines. These are amazing and you could walk up inside them. We finished off our day with a meal out at Wetherspoons in Cambourne. So lovely to be somewhere different, visiting different beaches and having a meal and a glass of wine out. 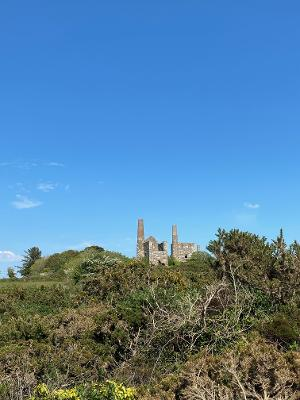 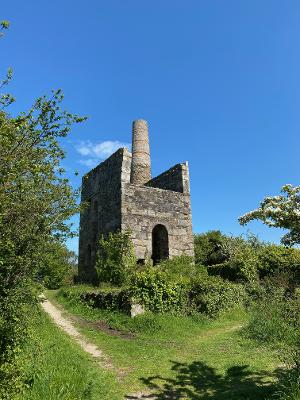 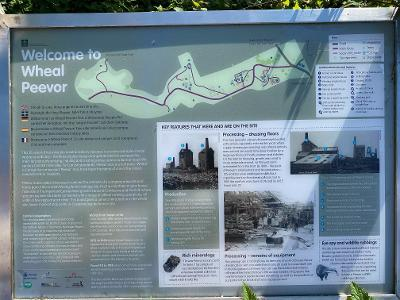 First thing on Monday we went and looked at Gwennap Pit just outside Redruth.  This is an amazing tiered amphitheatre like structure tucked away in a small village behind a church, which stands as a memorial to the Methodist movement in the 18th century. 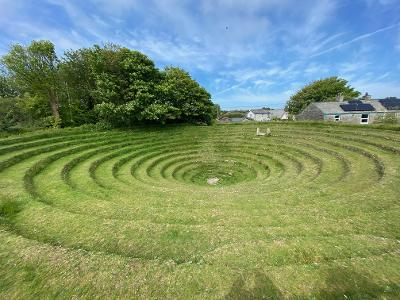 From here we went and had a wander around Redruth, a small market town, formerly a mining town and I managed to find a couple of things in the charity shops. One was a Lazy Jacks skirt and the other Hugh Fearnley-Whittingstall's book Veg so I was happy. After lunch we went to Godrevy beach which has a huge expanse of sand and which we only discovered last summer. It has a National Trust car park which we were lucky to get a space in so parking was free. 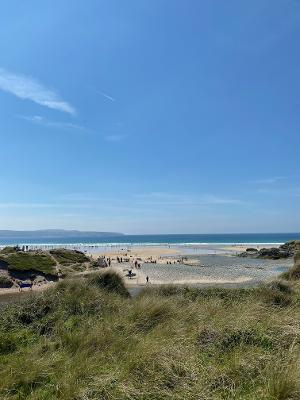 In the evening we went to Porthtowan and walked up the hill overlooking the beach. 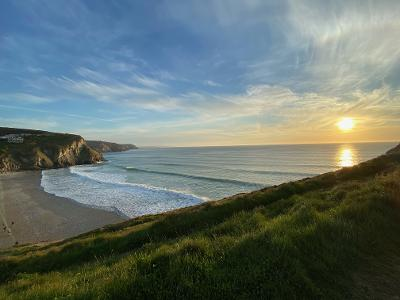 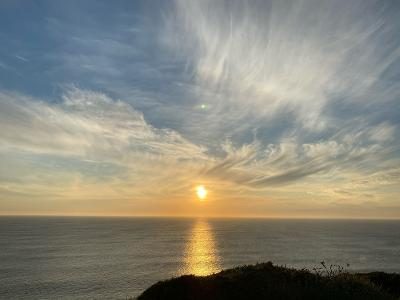 Tuesday Afternoon Hubby needed to catch up on some work e mails so he dropped us off in Porthtowan and me and the girls spent the afternoon on the beach.

Wednesday we had tickets for the gardens at St Michaels Mount. I was worried as the forecast said it was going to be heavy rain Wednesday morning but luckily we had a huge amount of rain Tuesday night but woke to a dry day Wednesday. We were booked for 10.30 and had to get the ferry over from Marazion which only takes about 5 minutes. As we arrived the sun came out and we had a lovely couple of hours exploring, having a coffee sat outside the cafe overlooking Marazion and I bought a couple of plants to bring home. Once we arrived back at Marazion we sat on the beach for an hour and had our picnic. By now it had clouded over so we gave some friends in Perranporth a call and went and spent a couple of hours sat in their garden catching up on the last couple of years. A used to work in the Bank in Truro with Hubby when we lived in Cornwall and we have kept in touch with her and her Husband D. They are a lovely couple and we always visit when we are on holiday down there. 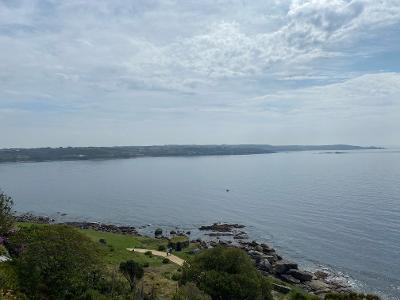 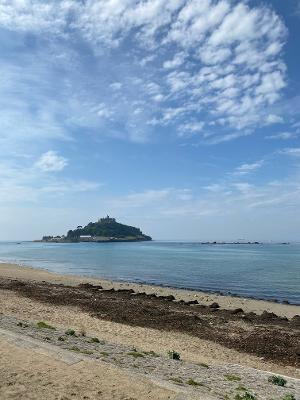 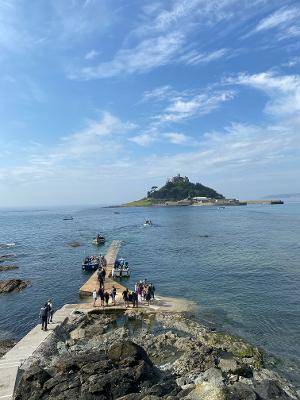 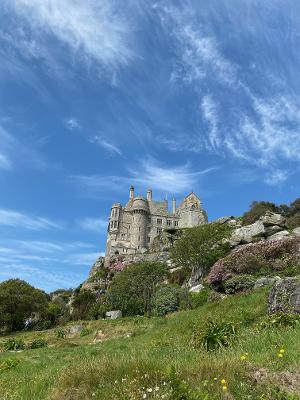 Thursday morning we had to leave S at the mobile home and make ourselves scarce as she had an interview on teams for a job in Swindon Hospital.  It isn't her first choice but she wanted interview experience. Ideally she would like to work in the Exeter hospital, Torbay as second choice and Bath or Plymouth as third choice. We left her to it and went over to a very pretty village called St Agnes for a walk around and a coffee out. It is a thriving village with lots of nice individual shops and cafes. We had a lovely coffee sat outside in the sunshine and it all felt very continental - just for a moment I could have believed I was in my beloved France! By the time we got back to the campsite S had already been offered a job at the hospital. She is going to accept for the moment, in case she doesn't get anything better offered, and is actually torn because the preceptorship programme they offer is really good. After lunch we went back down to the beach but it was very blowy so we only lasted a couple of hours before everyone had had enough.

After dinner we went to find Carn Brea monument. Wherever you are in the Cambourne area you can see it high up on a hill and S said she wanted to walk up around it. Off we went up a very bumpy track hoping we wouldn't meet anyone coming the other way, to find it. It was very windy up there and amazingly just a bit further along the track is a restaurant. I don't think I'd want to be driving up there in the winter for a meal. 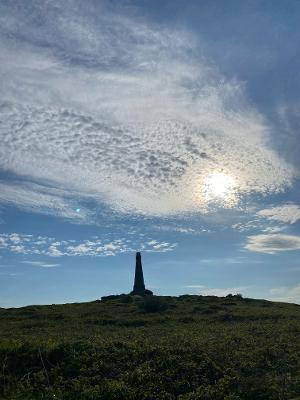 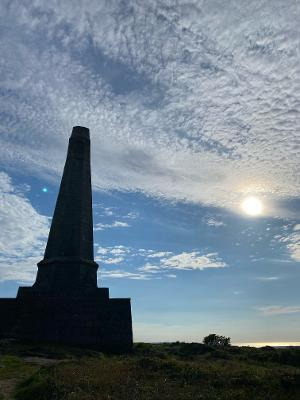 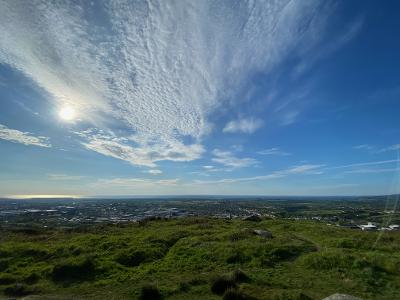 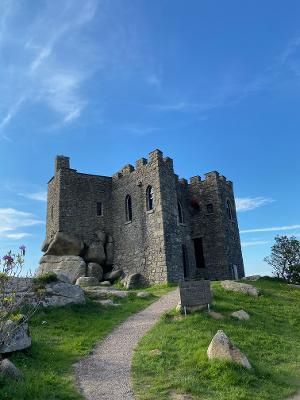 The last picture is the restaurant.

Friday was our last day so went for a final trip to the beach early in the morning as S and K wanted another session of bodyboarding and it was a lot warmer than the previous day. After lunch we packed up the car and headed home.

Today has been spent doing endless washing and tidying up the garden.

Well what an epic post and hopefully I haven't forgotten anything!